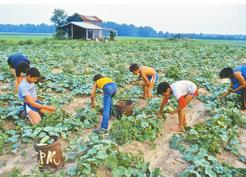 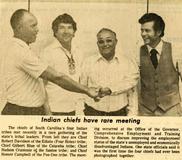 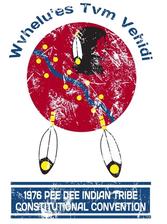 regarding both national & regional American Indian issues. Though centuries of

oppression, slavery, disease and discrimination have significantly reduced the tribe's

population and influence, recent efforts by the tribal government to once again establish

the Pee Dee as a power in the region have proven fruitful. Expansion of the tribe's land,

as well as additional federal, state & tribal government services are two of the many ways

in which the tribal government has successfully worked toward achieving this goal.

Farming has always been an extremely important aspect of Pee Dee existence & culture. Due to the significant & deeply sacred position that land & nature continue to hold within Pee Dee culture & society,

agriculture-based economy & community. However, in response to an ever evolving world

Frequent cultural, religious & administrative tribal events have allowed newer generations of Pee Dee to remain connected to their Pee Dee identity & culture, while simultaneously allowing them to pursue a vast array of exciting & new opportunities. Competing in stickball & chunkey, observing Busk, as well as storytelling, dancing, beading & cooking are just a few of the many cultural traditions continually practiced for generations by the Pee Dee people. PDIT recently initiated the Pee Dee Language Revitalization Program (PDLRP) aimed at teaching the Pee Dee language to all Pee Dee who wish to learn. The Pee Dee speak a dialect of Mvskoke. Additionally, the tribe began work on the Pee Dee Tribal Mounds in late 2017. Once completed, the Pee Dee Tribal Mounds will become the cultural, societal & spiritual mecca of the Pee Dee people.

As a result of the collaborative work of tribal leaders, community volunteers & university researchers, extensive tribal archives were created in order to assist tribal efforts to protect & preserve the identity & culture of the Pee Dee people. Many of the records within the tribal archives were instrumental in helping PDIT illustrate a continued tribal & cultural presence in the area.  The tribal archives include school records, census data, military records, tribal artifacts, photographs, maps, personal letters, church records, birth & death certificates, marriage licenses, as well as an extensive collection of official government documentation dating from present-day all the way back to the 16th Century in which multiple entities consistently refer to Pee Dee people as 'Indian', an "Indian Community" & an "Indian Tribe".

Early Pee Dee culture & society was politically complex. Pee Dee cultural & religious practices included the construction of mounds. Mounds were built for the elite, elaborate ceremonial practices were observed & a large amount of territory was presided over.  In both northern South Carolina & southern North Carolina, the clearest expression of South Appalachian Mississippian tradition is the Pee Dee culture.  The most obvious archaeological site relating to the Pee Dee people is the Town Creek Mounds, located on the Little River in Montgomery County, North Carolina.

In addition to being a major habitation spot, Town Creek served as a

place for discussion of matters important to the collective clans of

the tribe.  Town Creek was the setting for significant religious

many socially high-ranking members of the tribe lived, died & are

buried there. The sacred site still holds great meaning to the Pee Dee.

Busk was an extremely important Pee Dee ceremony performed at Town Creek.  In fact, even to this day the Pee Dee still perform an annual Busk ceremony on the tribe's current land in South Carolina.  Traditionally during Busk, houses were cleaned & the temple & grounds were repaired.  All fires were extinguished & all debts and grievances were resolved.  People came from outlying villages & gathered at the ceremonial center for rituals of purification: ceremonial bathing, fasting, scratching the body with garfish teeth, & taking cathartic medicines.  Everyone prepared to begin the new year with the eating of new corn at the conclusion of Busk.  At the conclusion of Busk, visitors returned to their villages, carrying with them embers from the sacred fire with which to relight the hearths in their own homes.  Sharing the fire symbolized unity among the Pee Dee, which is why the Pee Dee are still referred to as "the people of one fire".  The tribe has continued this tradition & still maintains a "tribal firekeeper".  It is a position of great respect & responsibility & is always held by a tribal elder.

Early Pee Dee culture included the use of copper & shells.  Additionally, beads, gorgets & pins were fashioned from conch shell.  As evident at modern day tribal events, many Pee Dee continue to include a significant amount of copper, traditional beading & conch shells in both their event regalia & daily wear.

In 1711, the Tuscarora War broke out in North Carolina.  A year later, the Pee Dee, along with other tribes in the region, fought alongside the British against the Tuscarora.  Pee Dee warriors served in British Captain John Bull's company, and the Pee Dee & British triumphed over the Tuscarora.

In 1715, English mapmakers recorded a Pee Dee village on the west band of the Pee Dee River's central course.
The Yamasee War began that same year.  It lasted until 1717 & greatly diminished the Pee Dee's power & population.  However, many survivors found refuge with the fellow Siouan-speaking Catawba, while others moved closer to English settlements.

In 1716, it was recorded that a Pee Dee named Tom West approached the South Carolina colonial government on behalf of the Cheraws to conciliate a peace with the colony.

In 1733, White Corn Johnny (a Pee Dee) was murdered by William Kemp (a white man) in South Carolina.

In 1737, the tribe petitioned the colony of South Carolina for a tract of land to live upon.  A year later, the Pee Dee were moved onto a 100-acre tract of land (Coachman Reservation) located in what is now Dorchester County, South Carolina, along the Edisto River.

In 1741, South Carolina Lieutenant Governor William Bull granted commissions drawn up on parchment to several chiefs among the Catawba Nation, including Captain Twenty of the Pee Dee.

In 1743, a group of Pee Dee are recorded as having visited Charles Town, South Carolina and were awarded gifts by the town's council.

In 1744, the Pee Dee attacked & killed several Catawba.  In retaliation, the Catawba drove many of the Pee Dee further towards English settlements.

In 1751, at an inter-tribal conference in Albany, New York, the Pee Dee were recorded as being a small tribe predominately living near English settlements.  During the conference it was requested that the Iroquois not war against the Pee Dee.

In 1752, King Hagler of the Catawba wrote South Carolina Governor Glen urging him to persuade the "great many Pee Dee" living near white settlements to join the Catawba.

In 1753, an unidentified Pee Dee is recorded as having been taken prisoner by "Northern Indians".

In 1755, South Carolina Governor John Glen informed King Haigler that South Carolina had convinced "some of the Pee Dee" to join the Catawba.  Later that year, it was recorded that several Cherokee & Natchez had killed multiple Pee Dee living near white settlements.  Additionally, in 1755 about "Northern Indians" are recorded as having killed two Pee Dee women near Goose Creek, South Carolina and kidnapped two Pee Dee boys.

In 1755, Lewis Jones is recorded as being Chief of the Pee Dee.

In 1775, 50 Pee Dee warriors fought in the infamous "Raccoon Company" under Captain John Alston in the U.S. Revolutionary War.

Through much of the 19th & 20th Centuries, the tribe has determinedly managed to maintain a continual presence in the area.  During the last two centuries most of the Pee Dee worked as sharecroppers for white landowners that came to own the very land the tribe had once controlled.  In a continued effort to suppress the rights of the Pee Dee people, each election day white landowners would load up every male Pee Dee sharecropper of voting age in the back of a large horse drawn wagon that would take them to the nearest polling site.  The white landowners would instruct the Pee Dee men on who to vote for.  If a Pee Dee man decided to vote differently from how he was instructed, he & his entire family were thrown off of the land they farmed.  Blatant political, economic, judicial & cultural oppression against the Pee Dee people was a constant part of everyday life during the 19th & 20th Centuries.  Many of the ramifications resulting from these oppressive actions can still be felt quite profoundly throughout Pee Dee society today.

Due to segregation & Jim Crow laws, the Sardis Indian School was

founded in 1885 for Pee Dee children in Dillon County.

Additionally, the Leland Grove School for Indians was founded

continued to operate until 1976, shortly after South Carolina's public

schools were desegregated.  On the few occasions in which Pee Dee

were forced to sit at the back of the classroom.  Only after all of the

white students had been served lunch were the Pee Dee students

served.  Pee Dee students also had to stay in the cafeteria after lunch

and clean up while the white students went back to class to receive academic instruction.

Leland Grove Church, & several other "Indian churches" in the

Pee Dee gatherings outside of the public eye. Under the stewardship

of Pee Dee elders, churches played a significant role in not only

keeping tribal members connected with one another, but also allowed

tribal members to maintain their Pee Dee identity.  A great many

tribal members are buried at the Pee Dee Chapel burial grounds, as

well as the Leland Grove Church burial grounds.  To this day, both

During the Tribal Convention of 1976, the Government of the Pee Dee Indian Tribe officially adopted its current constitution. Its fundamental principles & outlined beliefs have guided all aspects of the tribal government's operations for nearly half a century.

Governor, to discuss the state's unemployed and economically disadvantaged

During the early 1980s, Vice-Chief Stump Hunt led the charge to

document through imagery the everyday experiences of the Pee Dee

during that period. The tribal government's collaboration with

photographer Gene Crediford has provided the tribe with invaluable

National and regional advocacy regarding American Indian rights has been an important part of the PDIT Government's mission for decades. The Government of the Pee Dee Indian Tribe routinely sends tribal government representatives to Washington D.C. to advocate for not only the Pee Dee people, but for all American Indians. In 2017, PDIT representatives participated in the Longest Walk. The annual event was organized by AIM co-founder Dennis Banks. The event raised awareness regarding domestic violence & addiction within the American Indian community. In 2019, PDIT representatives participated in the Indigenous Peoples March.

In 2018, the Tribal Council of the Pee Dee Indian Tribe voted to ban

alcohol & concealable weapons from all tribal land & event that fall

under the jurisdiction of the Government of the Pee Dee Indian

Tribe. While the alcohol ban had been an "unspoken rule" since the

mid-1970s, the PDIT Tribal Council decided to officially vote the

The PDIT Government sent tribal representatives to the 2019 Justice First Press Conference and Congressional Briefings at the National Press Club in Washington D.C. The conference focused on raising awareness about the need to center justice in energy equity and sustainability conversations. Additionally, building power in local communities; addressing systemic racism; advancing nuclear harm reduction efforts; and building solidarity with other minority communities were key aspects of the conference. The information gained and the relationships forged during national events such as this allow the PDIT Government to work toward creating programs and accessing resources that are aimed at improving the quality of life for the Pee Dee people.

Later in 2019, PDIT government officials were honored to speak about the tribe's deep

cultural, economic & spiritual ties to the environment during a global environmental

summit in Atlanta, GA focused on the disproportionate impact that environmental

Al Gore was among those in attendance.